← more from
Paradise of Bachelors
Get fresh music recommendations delivered to your inbox every Friday. 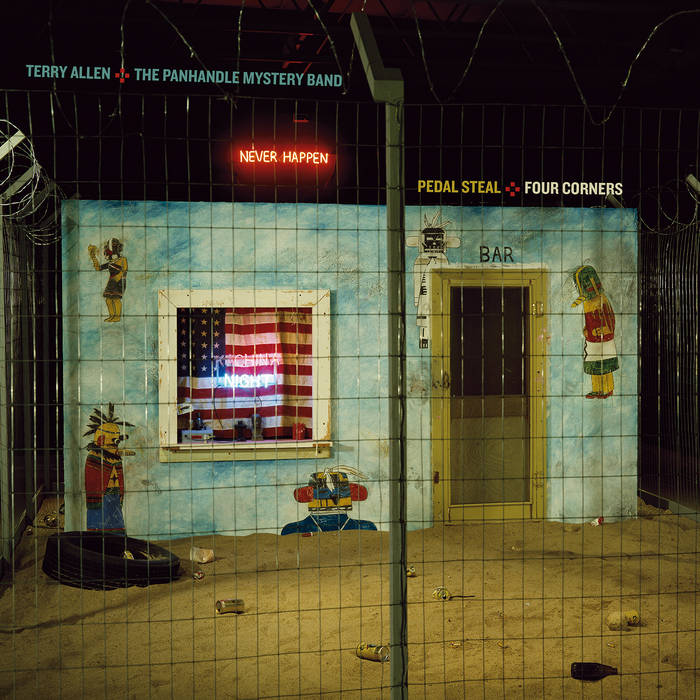 peterjkraus Loved Chippy, and when I read the current Grammy list today, I had to buy (for myself and my music industry son)

Legendary Texan artist Terry Allen occupies a unique position straddling the frontiers of country music and conceptual art; he has worked with everyone from Guy Clark to David Byrne to Lucinda Williams, and his artwork resides in museums worldwide. Pedal Steal + Four Corners collects, for the first time, Allen’s radio plays and long-form narrative audio works—two and a half hours of cinematic songs, stories, and country-concrète sound collage—in a deluxe gatefold edition, including one LP, three CDs, a DL code, and an exhaustive, Grammy-nominated 28pp. color booklet boasting the first in-depth essay to explore this singular body of work; dozens of images of Allen’s related visual art; and full scripts and credits for all five pieces (a total of 33k words). Pedal Steal (1985), originally composed as a soundtrack to a dance performance, appears on vinyl for the first time, as well as on CD. Torso Hell (1986), Bleeder (1990), Reunion (a return to Juarez) (1992), and Dugout (1993) comprise the Four Corners suite, radio plays broadcast on NPR and never before released, now spanning two CDs. All audio has been meticulously remastered from the original tapes. Fans of Allen’s violent masterpiece Juarez will find much to love in these haunting Southwestern desert dramas, which feature Jo Harvey Allen, Lloyd Maines, Butch Hancock, Stones saxophonist Bobby Keys, and many others. Roger Corman tried to option the film rights; Jesse Helms tried to ban them; now you can own them!

N.B.: PoB's own Brendan Greaves has been nominated for a 2020 Grammy Award for Best Album Notes for this release. The thing about a Grammy nomination for notes is that, unlike the audio, the notes are only accessible to those who have purchased the album. But we'd like everyone to discover this dimension of Terry's work, so for a limited time, you can download and read the album book in its entirety here (bit.ly/2OBLbD5), for free, including Brendan's essay "'The Radio ... and Real Life': Pedal Steal, Four Corners, and Other Panhandle Mysteries of the Wind."

I think there are three great American inventions: one is duct tape, one is hot glue, and the other one is putting radios in cars.
– Terry Allen, “A Self-Interview,” 1994

The five works on Terry Allen’s Pedal Steal + Four Corners were all created during a period of intense, condensed creativity spanning eight years, are all closely related to his interdisciplinary bodies of visual art and performance, and are all set in the American Southwest and West. Like Allen’s songwriting, which only nominally fits within the realm of country music (“Which country?” Terry quips), his work for radio, and his long-form narrative audio recordings more broadly, appropriate the general form and format of the genre, or medium, of popular radio dramas—monologue, dialogue, songs, interstitial instrumentals, and diegetic sound cues within a roughly thirty minute running time—but transform it into something much denser with meaning within a postmodern art context. They prefigure similar podcast experiments by decades.

Pedal Steal (1985), originally composed as the Bessie Award-winning soundtrack to a dance performance by Margaret Jenkins Dance Co.—and the only one of these works that has been previously released—actually premiered not on air, but rather onstage at the Brooklyn Academy of Music. However, its Four Corners companion pieces would not have been possible without the earlier and more structurally complex, blueprint of Pedal Steal, the first long-form narrative recording Allen undertook with the support of the Panhandle Mystery Band, actor and writer (and Terry’s wife) Jo Harvey Allen, and other collaborators including fellow Lubbockites Butch Hancock and Rolling Stones saxophonist Bobby Keys. The story elides the New Mexican pedal steel guitarist Wayne Gailey and legendary outlaw Billy the Kid into a spectral composite character called Billy the Boy, resurrected by a postmortem chorus in English, Spanish, and Navajo.

Torso Hell (1986), Bleeder (1990), Reunion (a return to Juarez) (1992), and Dugout (1993) together comprise the Four Corners suite, a reference both to a song from Allen’s first album Juarez (1975), and to the site where the state lines of Colorado, New Mexico, Arizona, and Utah crash in a cartographic crucifix. Allen designed these radio plays specifically for listening in a car, always a favorite space to audition his audio work. All Four Corners works were broadcast on NPR affiliates nationwide. The latter three were commissioned by New American Radio, an organization which, from 1987 to 1998, commissioned more than 300 experimental works for radio by artists such as Pura Fé, Pauline Oliveros, and Christian Marclay.

Even moreso than Pedal Steal, with which it shares a creative genealogy, Torso Hell is a direct and visceral articulation of Allen’s YOUTH IN ASIA body of work (1982–92) and its examinations of the psychological residues and betrayals of the Vietnam War. This “radio movie” about a quadriplegic Vietnam veteran’s torments and revenge shares the extreme violence and sexuality of its pulp inspirations, but presses into the realm of absurdity and metafiction, serving simultaneously as a parody of trashy B horror flicks and ponderous Hollywood Vietnam movies and as a vicious commentary on war and its endless rhetorical wake, the ways we abuse, exploit, and ignore our veterans while spouting inane pieties about honor, service, and patriotism.

Allen’s Anterabbit/Bleeder (a biography) cycle (1982–90) deploys fact and fiction, drawn partly from the life a hemophiliac childhood friend, to explore the very nature of biography and history, the ways our language and memories fail and fool us with their feeble reenactments and fractured transmissions of the past filtered through our myopic present. Memories are hemorrhages, Bleeder suggests, that stain our speech, our stories, and our mark-making with Rorschach bruises of untruths, exaggerations, and fantasies.

Ostensibly the “simple story” of the fateful but arbitrary murder, in a “small, rundown mountain trailer” in Cortez, Colorado, of Navy boy Sailor and his new bride, the Tijuana prostitute Spanish Alice at the hands of Juarez-born pachuco Jabo and his LA girlfriend, the “rock writer” and bruja Chic Blundie, the narrative of Allen’s iterative JUAREZ cycle (1968–present) spirals outward, and inward, recursively through a palimpsest of possibilities, a constellation of connections. Reunion (a return to Juarez) offers a retelling of the tale, deployed both as a radio play and as the soundtrack for the sculptural installation a simple story (Juarez) (1992), exhibited at the Wexner Center but originally conceived as stage set studies for a Juarez musical, co-written with David Byrne but never produced.

His most personal and autobiographical work, DUGOUT is based loosely on the lives on Allen’s father, a retired professional baseball player turned promoter of concerts and wrestling, and his mother, a barrelhouse-style piano player and “the first woman ever to be thrown out of SMU [Southern Methodist University], for playing jazz with black musicians in Deep Ellum in Dallas.” Allen himself describes the DUGOUT cycle, which includes Dugout the radio play, as “a love story, an investigation into how memory is invented, a kind of supernatural-jazz-sport-history-ghost-blood-fiction that rolls across the late nineteenth century into the mid-twentieth century.”

Pedal Steal + Four Corners serves as a ligament between Terry’s music, writing, visual art, and theatrical work, and as a bridge to Jo Harvey’s writing, theatrical work, film work, and acting. And yet they function as standalone documents, stripped of the accretion of visual cues, the shell of objecthood, while retaining the density and transport of dreaming. In the absence of the visual, what is left resembles spells, rituals, enactments of story and spirits, air and angels—in other words, memories.

Think Sam Shepard with steel guitar, and you'll get the idea. – The Independent

Allen’s songs extract strangeness from the known world and use it as a means of acquiring greater knowledge. – The New Yorker

He’s pretty close to a master lyricist. – The NY Times

Stunning poetry. The lines themselves quiver with a raw vision rarely heard. – Pitchfork

I love Terry. He’s a funny son of a bitch. – Guy Clark

People tell me it’s country music, and I ask, “Which country?” – Terry Allen

Damu The Fudgemunk shares his recent collab with Def Pressé, plus jams from Common and more