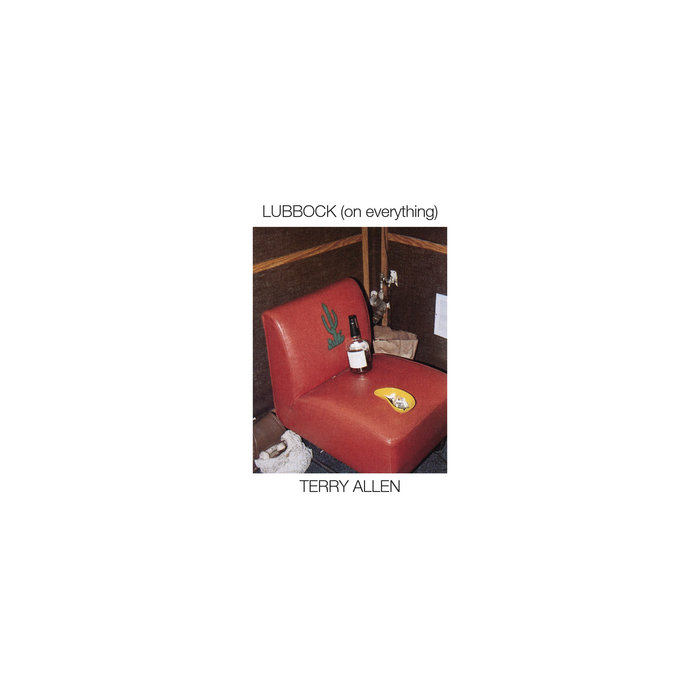 Ben Ackley My favorite album ever. Can't do better than that! Favorite track: The Great Joe Bob (a Regional Tragedy).

Cary Deez Nuts As a Lubbock native, this music harkens back to an era of my hometown mostly gone by this point. The 1970's in West Texas was a convergence of so many cultures and a microcosm of the world getting smaller by the day. Terry Allen captures the spirit wonderfully as his music and lyrics represents the beauty and divinity of the landscape and people. Favorite track: New Delhi Freight Train.
more...

Watch the unboxing video: youtu.be/t3zf15UVths
Watch a short documentary on the album: youtu.be/Uc4s6Q6XGVs

Legendary Texan artist Terry Allen occupies a unique position straddling the frontiers of country music and visual art; he has worked with everyone from Guy Clark to David Byrne to Lucinda Williams, and his artwork resides in museums worldwide. Widely acclaimed as a masterpiece, his deeply moving (and hilarious) satirical second album, a complex memory palace to his West Texas hometown Lubbock, is often cited as the urtext of alt-country. Produced in collaboration with the artist and meticulously remastered from the original analog tapes, this is the definitive edition: the first to correct the tape speed inconsistencies evident on all prior versions; the first U.S. vinyl reissue; the first CD to restore the full track listing; and the first to contextualize the record within Allen’s 50-year career.

Lubbock’s got a hard bark, with little or no self-pity; its music has an edge that can be smelled, like Lewter’s feed lot. No one from Lubbock ever apologized for what they were or where they lived.

Arguably Allen’s most widely beloved and most easily approachable album—it contains his two best-known and most oft-covered songs, “Amarillo Highway (for Dave Hickey)” and “New Delhi Freight Train” (famously first recorded by Little Feat)—Lubbock is his complex memory palace to his West Texas hometown. Rather than frantically covering ground like Juarez, with its map-happy, burnt-rubber pursuits and escapes, it instead digs down and burrows inward, to the heart of one rather plain High Plains city in the heart of the Llano Estacado, or “Palisaded Plains,” an interminably flat mesa larger than the state of Indiana that spans eastern New Mexico and northwestern Texas. Compared to its sparsely produced predecessor, it represents a much more collaborative, even collective, effort with a local Lubbock studio band, complete with rhythm section, pedal steel, fiddle, and horns, and helmed by master guitarist Lloyd Maines, who became Terry’s frequent musical partner, producer, and the de facto bandleader of the Panhandle Mystery Band.

With these twenty-one songs, written largely in self-imposed exile in California (all the while “cussing Lubbock”), Allen shifted modes from the sordid, violent mythology of Juarez to piquant prodigal-son satire. Instead of the corrido conjure of Jaurez, its eviscerations, elisions, and repossessions of roving identity and cartography, Lubbock incarnates an accidental capitulation to love, to home, to rootedness. Yes, it’s satire—at least until the final few songs, which take a turn towards the nakedly personal—but it’s also deeply affectionate, compassionate, and empathetic towards its subjects, even when they are ridiculous or pathetic. Especially when they are ridiculous or pathetic—and at their most vulnerable—these all too human characters come alive. The way the songs wield cutting humor like a scalpel—managing a high-wire balance between literate and guttural, acerbic and affectionate, cynical and sanguine—is more reminiscent of the surgical satire of Mark Twain or Kurt Weill or Randy Newman than the cris de cœur of fellow “outlaw” artists like Waylon or Willie or Terry’s close friend and collaborator Guy Clark. As Terry told me, revealingly, about songwriting, “If it’s not a lie, it’s probably satire.”

They are love songs, one and all, but obliquely so. The songs that describe romantic or erotic love or chart the narrative arc of such relationships—“High Plains Jamboree,” “The Wolfman of Del Rio,” “The Girl Who Danced Oklahoma,” “The Beautiful Waitress,” “Cocktails for Three,” “Blue Asian Reds”—appropriate love song tropes and functions towards other metaphorical ends, grasping at ways of meaning far beyond the basic bilateral syntax and sentimental idiom of love songs. The songs are nominally about Lubbock and its denizens, but they angle for universality—the album could just as well have been called Lubbock (on everywhere). True to its title’s winking, extravagant ambition, the record not only summons a city, but likewise attempts to encompass everything, sublime and banal alike, in a great, untidy embrace: love and heartbreak; marriage and its (dis)contents; family and childhood; driving and travel; the art world and its classist contortions; booze and pills; sports and play; agriculture and foodways; the ambitions, failures, frustrations, and satisfactions of labor and art; crime and war and violence and peace; the mirages of memory; the passing of time; and finally, poignantly, the dissolution and disappearance of the self (the devastating “I Just Left Myself.”)

Lubbock movingly reflects one of the weirdly wrenching and reassuring processes of adulthood, the realization that you have been irrevocably shaped by your past, your hometown, and your family, whether you like or it not. The tension between masking and unmasking evident throughout Lubbock and its cast of conflicted characters suggests this ingrained ambivalence about escaping our pasts, the impossibility of permanently leaving home behind. Despite our best efforts to molt and forge independent, separate identities, we carry the stale freight of home, of our childhoods, with us everywhere on our backs, for the remainder of our lives, whether we see it or not, like deluded turtles. The question is how to crawl along with some measure of grace.

Lubbock’s intellectually tough transmutation—through Allen’s detailed and idiosyncratic songwriting—of honky-tonk’s flinty foundations into something altogether stranger and subtler took a pickaxe to the notion that country music as a form is fossilized, fixed, or inherently conservative, influencing generations of artists. Songwriters from well beyond West Texas and the increasingly insular and constrictive confines of country continue to discuss the album with breathless reverence, citing how it changed everything for those who were listening. It forces you to rethink the possibilities of the form, to consider the subversive potential of operating within a loose country genre context without feeling hidebound by its traditions. Even if Allen’s music is more accurately described as art-country, Lubbock (on everything) sowed the seeds of alt-country’s emergence a decade later. It’s no accident that Lloyd Maines went on to play on classic albums like Uncle Tupelo’s Anodyne (1993) and Wilco’s A.M. (1995), and to produce Richard Buckner, nor that Sturgill Simpson and Jason Isbell perform “Amarillo Highway” in concert. This is the urtext, the template for everything that followed.

+ The definitive, deluxe edition of the art-country classic: produced in collaboration with the artist; remastered from the original analog tapes; first U.S. vinyl reissue; first CD to restore the full track listing; first to correct the tape speed inconsistencies evident on all prior versions; and the first to contextualize the record within Allen’s 50-year career.

Allen’s songs extract strangeness from the known world and use it as a means of acquiring greater knowledge.

5 stars; ‘50 Essential Albums of the 1970s.’ Eccentric and uncompromising, savage and beautiful, literate and guttural.

A masterpiece. One of the finest country albums of all time, a progenitor of what would eventually be called alt-country.

The most succinct commentary on the West Texas condition ever captured.

Nobody else does country music like Terry Allen … There’s not a wasted word or extraneous musical lick. ­

I love Terry. He’s a funny son of a bitch.

People tell me it’s country music, and I ask, “Which country?”